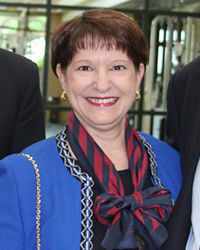 Department(s)
Board of Trustees

In addition to the Board of Trustees of the Gow School, Mrs. Mary Ann Coulson is a current board member and President of Buffalo Prep, The WNY Women’s Foundation, and United Way of Buffalo and Erie County Women United Advisory Board and Endowment & Planned Giving Committee.

Mrs. Mary Ann Coulson is a past board member of Greater Niagara Frontier Council Boy Scouts of America, The Buffalo Branch of The International Dyslexia Association, Junior Achievement of Western New York, and The West Seneca, Lafayette and Lancaster Academy of Finance.

Mrs. Coulson was born in Fort Campbell, Kentucky and lived in Germany, Pennsylvania and North Carolina while her father was in the military where he served as a Green Beret. She graduated from North Carolina State University with a B.S. in Mathematics Education. After university, Mrs. Coulson was a high school math teacher and track coach. She moved to Salisbury, Maryland in 1986 and joined Dean Witter as an account executive. After completing the Dean Witter Management Development Program in 1993, Mrs. Coulson held several management positions in New York City, New Jersey and Buffalo.

Mrs. Coulson resides in Buffalo and Canada with her husband, David. Her son Adam '04, a four-year student at Gow, graduated from the University of Cincinnati in 2011 with a double major in architectural engineering and construction management. He works at the Kroger Company Corporate Office as a store planner for the facility-engineering department.

Back to Our Faculty